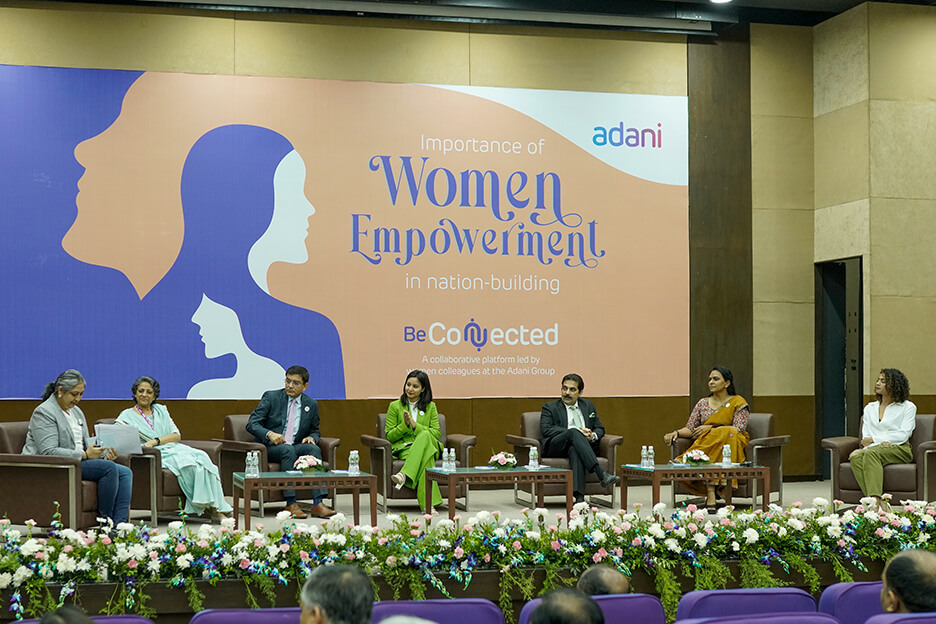 For 2022’s International Women’s Day, the Adani Group organized a collective reflection on the challenges and opportunities in building a transformative agenda for women empowerment leading to nation building.

Financial literacy, self-defense, and inculcating change at young age to eliminate gender bias, these were some of the topics that were put on the table during the International Women’s Day panel discussion organized by Adani Group. The forum couldn’t agree more that women participation is needed across the horizons, especially in the areas that influence policymaking, and also in global causes such as mitigation of climate change.

The day commenced with the screening of ‘a-rising: Dr Priti Adani in conversation with impact makers’. It laid a solid foundation to the panel discussion as the movie showcased rural women as caregivers yet decision-makers and a powerful force at not just the ballot box but also in nation building. Their voices were critical as they achieved transformative change in rural communities by taking charge and making the tide turn in their favour. These women also called impact-makers have a special focus on empowering and engaging more and more women. This is a start of a change where if women are back to work, we shall soon be able to claim the dream to be an Equal Nation.

Watch the film to know what unfolds when women are put in positions of power. It just isn’t beneficial for a short term, but they create policies that benefit women, children, and the entire community for generations to come.

On the occasion of International Women’s Day that has a really strong international dimension, Paridhi Adani, Partner at Cyril Amarchand Mangaldas, gave the keynote address. In her address, Paridhi discussed empowerment, inclusion, and community. She averred, “The world has in the past and continues to acknowledge that for us to fully succeed and to sustain, gender parity and diversity is critical. It is no longer an option. We must bring women into mainstream and equally into the unconventional roles to transcend the office environment. This certainly doesn’t mean that the rise of women is the fall of men. In fact, it is a beautiful jugalbandi where there is exponential mutual success and respect.”

The discourse provided a platform to explore the areas to work upon to mitigate biases, importance of financial literacy and the change each one of us can bring for the larger good. The conversation emphasized on actions needed to support the role of women as agents of change towards a human-centered path to a more equal world of work. “As a responsible business conglomerate, the Adani Group shares the desire to create a world that is diverse, equitable, and inclusive. A world where difference is valued and celebrated and a world that is gender equal doesn’t seem farfetched if we work towards it sincerely,” shared Rajeev Arora.

The panelists exchanged views on women who break shackles to aim big and realize their dreams. Several awe-inspiring stories were exchanged. Harmilan Bains, an athlete, averred, “My parents forced me into running. I didn’t like it then but eventually the medals enticed me. I wouldn’t say it was easy as I faced discrimination and have witnessed girls around me face the same. But the satisfaction of making your name is a feeling beyond words and I want each woman to make their own identity.”

While there are some women who may feel lost due to societal pressures and lack of conviction, there are many others out there who have taken the plunge, stuck to their dreams, and set an example. “I grew up in an environment where there were lot many biases. Certain jobs were meant only for men. If you are a woman, you ought to be a doctor or a teacher. And if a woman dare chose any other career choice, it used to be a battle both at home and society,” shared Deveshri Patel, “When I went on to choose engineering as my career, I received a lot of flak. I refused to be pigeonholed and thankfully my choice of specialization (Computer Science) came to my rescue. Fortunately, IT as an industry has lesser biases and is driven by Western professional culture which is more open towards inclusivity. It worked out in my favour and that is how I am here today, living and realizing my dream.”

The gathering also touched on topics such as: ‘Creating a balance between motherhood and work; ‘Steps parents can take to tackle the society’s in-built biases’; ‘Role of the community in the life of a working woman’ and ‘Financial literacy empowering women to make independent decision’. “An unfortunate incident in my life forced me to understand finances. Despite being in managerial position, I never bothered to learn the basic of finance for self-reliance,” shared Deepa Nair, “Our education system focuses on getting a job and making money, but not on how to handle money. Financial abundance is not a sufficient condition to living an independent and empowered life. Financial literacy is equally important and forms the foundation for empowerment.”

The session further revealed the role of education to achieve more in the social, economic, and family lives of a woman. Dr Bali shared, “Financial literacy is a core life skill for participating in modern society. We will try to keep it in our curriculum as girls are growing up in an increasingly complex world where they will eventually need to take charge of their own financial future. I don’t see a reason why it cannot be learnt or dealt with.”

The interaction touched upon working as one and how ‘together everyone achieves more’. A lot of tips and tricks were also discussed that would help women move in the society fearlessly and protect themselves, if need be. “As a society we need to grasp the immediate method to empower women with better tools and support systems. To start with, a woman should keep herself fit to run, if need be, and carry tools like Swiss knife, pepper-spray, or a hammer. Today’s women need to be empowered with techniques with which she can make sure about her freedom,” shared Major Preeti Sehrawat.

The panel also revealed that delegating responsibilities and sharing parenting duties and household chores is the secret to achieve a work-life balance while others expressed the necessity to tackle biases from an early age to raise more enterprising girls. Recalls Sushma Oza, “The mere act of my parents encouraging me to travel alone when I was just 6, empowered me. They didn’t discriminate making me further strong. Gender equality begins at home, and families are at the front lines of change. Support her and create an enabling environment at home for she is an architect of the society.”

The discussion ended on a happy and cheerful note reiterating certain female-centric issues that each individual could address in their own way. The day, panel discussion, and movie screening--altogether spoke aloud how she isn’t a lesser human being but the first homeland of human beings.

Could not attend the paneldiscussion this IWD 2022? Don’t worry, we got you covered. Find below the video of the panel discussion and hear from a diverse panel—their experiences, journey, and how we can collectively accelerate equality.