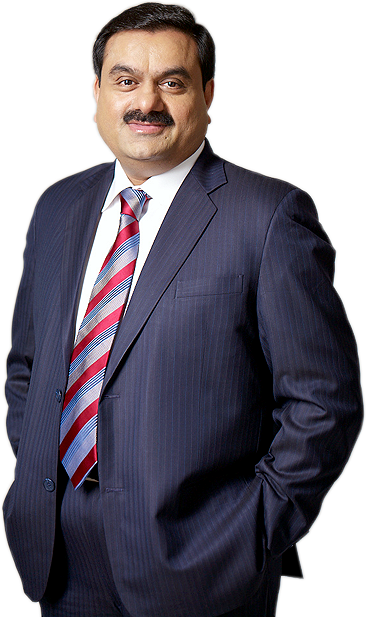 Mr. Gautam Adani is the founder and the Chairman of the Adani Group which ranks among the top 3 industrial conglomerates in India. Mr. Adani, a first-generation entrepreneur, is driven by the core philosophy of infusing “Growth with Goodness” through his vision of nation-building. Each of the Group’s businesses are focused on helping build world-class infrastructure capabilities to help accelerate the growth for India.


Adani Group is constituted of 6 publicly listed entities with combined revenues of USD $15 billion and market capitalization in excess of $40 billion (as on 28th Oct 2020); with businesses spanning across Energy, Ports & Logistics, Mining & Resources, Gas, Defence & Aerospace and Airports. In each of its business areas, the Group has established leadership position in India.


Nation-building, for Mr. Adani, means transforming the coastline of India by building a series of ports and logistics hubs, thus generating several tens of thousands of jobs. It means transforming the power scenario in India and mitigating the urban rural divide by delivering electricity to several hundreds of millions living in the hinterlands of India. It means enabling food security by building a modern agriculture supply chain empowering the farmers of our country. It means to fulfill India’s energy requirements and become one of the largest players in sustainable energy by making the largest commitment to the renewables ecosystem spanning across solar manufacturing, generation, and solar park businesses. It means playing an instrumental role in helping India become self-reliant in defence and security, and making India the hub for defence manufacturing.


The Group has a strong track record of working with global leaders who want to participate in the India growth story; the global expertise of these international companies in their respective businesses, combined with the local execution and market capabilities of Adani Group has created enduring partnerships. The list of partners includes the likes of Wilmar Group, Total, Elbit Systems, BASF, SAAB, MSC, CMA-CGM and others across several industries.


Adani Foundation is the Group’s Corporate Social Responsibility arm and has increasingly become a key area of focus for Mr. Adani. Until March 2019, Adani Foundation’s pan-India initiatives across key sectors of education, healthcare, community infrastructure, and sustainable livelihood touched more than 3.5 Million direct and indirect beneficiaries in 2300 villages across 18 states.